“Now that we can talk about it, Robin Williams was on a drug treating the symptoms of Parkinson’s,” he wrote. “One of the side effects is suicide!” Is There Any Way Out of Incurable?

I write on the relationship of spirituality to health from my perspective as a London-based Christian Science practitioner. I also enjoy engaging with journalists, health professionals and government officials as the media and legislative liaison for Christian Science in the UK and the Republic of Ireland.

The revelation Robin Williams had Parkinson’s has put a spotlight on the drugs offered to alleviate its symptoms. Is there another way to approach it?

As if depression and addiction weren’t enough, we now learn Robin Williams also faced the daunting diagnosis of Parkinson’s Disease.

But the extent of the tragedy may not stop there if speculation by his close friend Rob Schneider proves correct.

“Now that we can talk about it, Robin Williams was on a drug treating the symptoms of Parkinson’s. One of the side effects is suicide!” he wrote.

As the circumstances surrounding the star’s sad demise continue to prompt searching questions, this new concern could end up gaining more prominence given the surfacing of a podcast in which he described the one time he had felt suicidal. He described handling that temptation rationally despite battling a drink problem at the time. Could that be a pointer to something other than just his circumstances influencing his tragic decision to take his life?

There’s certainly a need for far more accurate information on links between certain meds and suicidal tendencies, according to draft guidance published by the US Food and Drug Administration in 2012. The document calls on the drug industry to pay more attention to assessing the strength of that connection during both “psychiatric and nonpsychiatric” drug development.

Set against the backdrop of an increasing view among medical practitioners that reaching for the prescription pad may not always be the best option, this begs the question: “Is there any way to cope with distressing diagnoses without having to take such drugs?”

There are certainly many approaches to managing health issues. But there is one that Robin Williams himself knew at least something about. In the same podcast in which he spoke of once avoiding the siren call to suicide, the star fleetingly jested about his mother’s interest in Christian Science, calling her a “Christian Dior Scientist”.

He might have also joked that if there’s one thing Christian Science guarantees it’s freedom from drug-related side effects – since its approach to health employs solely spiritual means for healing, instead of using meds and other material aids.

In today’s highly medicalised society, opting out of medical means can sometimes be mistaken for doing nothing. Yet, as in medical care, such healing involves a conviction of the need for action to restore lost health. The difference is that it sees the primary change required to be a thought-shift rather than a chemical adjustment – and applies the healing agent of prayer. Not prayer as in pleading. But thought that seeks a change of perception from the transient, material sense of identity that so seems to define us, to a higher view of being created “in the image and likeness” of the Divine, as the Bible puts it.

Doing that can be powerful, as one man discovered when diagnosed with Parkinson’s.

He writes: “Three doctors took brain scans and determined that I had Parkinson’s disease. Their prognosis was that I would first need a wheelchair and later on be confined to a bed. They told me there was no cure.”

A neurologist prescribed pills, but after they made him feel worse he was taken off all medication.

Instead of resigning himself to the prognosis, he decided to revert to the spiritual practice he’d grown up with but had left behind – the “divine Science of Mind-healing”, as Mary Baker Eddy once described it. Change wasn’t immediate, but as he invested time and thought into understanding and expressing his spiritual nature he found himself getting better instead of worse.

“On Valentine’s Day in 2012, I received the greatest gift ever. My neurologist told me the Parkinson’s disease had vanished,” he wrote.

“As proof of my recovery, I participated in the Pasadena Senior Olympics last year and won several swimming medals.”

Referring to a scriptural passage about experiencing the “perfect peace” that comes when our minds are set on perceiving the divine nature of Life, he pointed to another lasting benefit from his healing: “I am in that peace.”

In gaining similar spiritual insights, I and many others have also found freedom from both physical and mental ailments. These include depression, addiction and suicidal urges, which could be regarded as some of the more distressing “side effects” of believing in the materiality of our existence.

“Side stepping” all such “side effects” through spiritual means is a lifelong journey of spiritual growth. And more. If the Bible is correct in saying that the last enemy to be overcome is death, then the pathway of a growing spiritual understanding goes on for those we lose sight of.

Rather than resting in peace, then, perhaps Life is actually having the last laugh over the notion of death and – like each of us one day will – Robin Williams is carrying on what the Bible calls working out his salvation “with awe and reverence”. 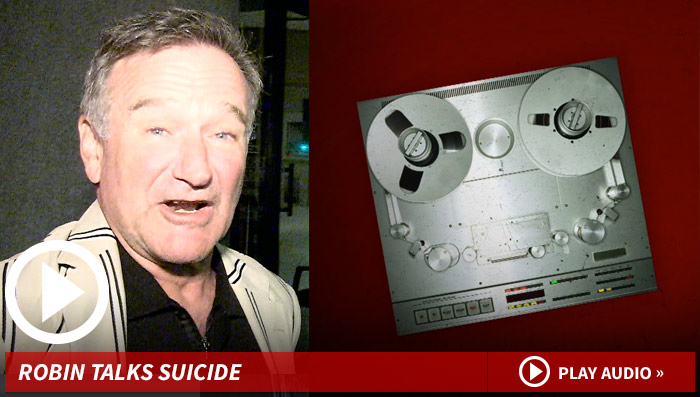 Robin Williams once talked about how he thought about committing suicide while struggling with addiction … and it’s chilling to hear him explain how he talked himself out of it.

Williams was on Marc Maron’s WTF Podcast in 2010. The 2 talk about death — Robin had just undergone a serious heart operation — and he launches into a monologue about a struggle he had when he seriously thought about ending his life.