Look long enough, and you see male and female one—sex or gender eliminated; you see the designation man meaning woman as well, and you see the whole universe included in one infinite Mind and reflected in the intelligent compound idea, image or likeness, called man, showing forth the infinite divine Principle, Love, called God,—man wedded to the Lamb, pledged to innocence, purity, perfection. 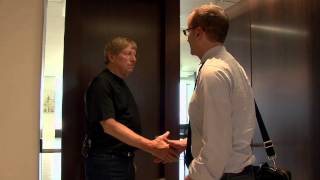 Op-ed: Keep Saying ‘I Do’ After the Altar

A year after its overturning, Prop. 8 plaintiffs and husbands Jeff Zarrillo and Paul Katami reflect on the progress of marriage equality.

BY JEFF ZARRILLO AND PAUL KATAMI

A lot can happen in a year. For us, this year was a transformative one. As we approach the one-year anniversary of the Defense of Marriage Act being struck down, we also celebrate the return of marriage equality to California with the overturning of Proposition 8. When this state constitutional amendment against same-sex marriage was approved by voters in 2008, it shocked the LGBT community into unifying, and the ripple effect across the globe was undeniable. We as a community and those who support us stood up to declare that the treatment of LGBT Americans as second-class citizens would not be tolerated. So we stood up, spoke out, marched in the streets, and galvanized a movement that had been pushing for so many decades towards a tipping point. And collectively, we pushed hard enough to take it over the edge.

We are very often asked why we got involved in our lawsuit to challenge the constitutionality of Prop. 8. The first of its kind in a federal court, the lawsuit demanded recognition that the Fourteenth Amendment to the U.S. Constitution should live up to its definition of equal protection and due process for gay and lesbian couples that wish to marry. It was risky, it was bold, and no one knew how it would end. So why not just let someone else carry that burden? Our answer is always that we just had to do something. We were so incredibly angered by the passage of Prop. 8 that we decided to turn that anger into action. We realized just what was at stake not only for us but for our state and our community. It was time to take a very private thing like our love and make it very public because our story was the story of so many.

We sometimes get in trouble for saying that this isn’t just about marriage — what we struggle against is a barrier to equality. Our history shows that anytime there has been a barrier to equality for any minority, it takes a courageous group of people to stand up and demand the change necessary to better protect the rights, dignity, and freedom of those minorities. Whether it was the incredibly brave young men and women of Stonewall, who 45 years ago this month stood up and finally said “Enough is enough” to police oppression. Or whether it was Harvey Milk saying that we need to come out and be proud of who we are. Or whether it was a group of students in Alabama refusing to get up from a lunch counter. And that’s what we are seeing across the country right now with so many lawsuits and initiatives to educate the public, bring awareness of inequality, and demand the rights we deserve based in the law. And finally, we’ve reached that tipping point. Finally, we are winning. Currently, every state in our union with a discriminatory marriage ban has a lawsuit challenging it, and every one of those lawsuits requires brave plaintiffs to stand up and say, “Enough is enough.” Courage can be contagious. You don’t need a lawsuit or a media platform to start that change. Regular people go out and create it!

We are just two ordinary guys from Burbank, Calif. We merged with an effort that came long before our federal challenge. We were lucky to be in a time where it was safer for us to stand up, and we are filled with gratitude that we were given a platform to tell our stories to help change hearts and minds. But you don’t need a legal team to do that. Our call to action is to say “I do” when people ask, “Do you feel the damage that is inflicted upon us, when we are told we are less than, or treated like second-class citizens?” And then to say “I do” when someone asks, “Do you want to do something about it?” It’s saying “I do” when someone asks, “Do you have time to help get the word out to support our brothers and sisters in states where they are still being discriminated against in their jobs, in their homes, and in their schools simply because of who they love or how they identify?” If your reaction is to say “I do,” then you have to turn that reaction into action.

It’s also saying “I do” when you marry the person you love and sending a message to the world: that falling in love and being married is normal, it’s human, and that includes us too.

Saying “I do” changed everything for us, and it wasn’t just the “I do” of vows. We learned to say “I do” as often and loudly in our daily lives so that we can continually tell our stories, be active, take chances, and hope that the momentum we see now only continues to grow stronger until all the barriers to equality fall, not only so that we can enjoy the benefits, but so those who come after us can live in a world that is safer, filled with more love than hate, and, most important, is more equal.

One year later, we can all take a moment to be thankful and proud of our past and celebrate how far we have come in the last year. But we must roll up our sleeves and continue the work yet to be done. You can help continue the work in your home, in your workplace, in your school, or your church by lifting your voice and living your truth out loud, so the world can see how strong and proud we are — not just as individuals, but as a community and as a family. Say “I do” to that.

JEFF ZARRILLO and PAUL KATAMI were plaintiffs in Hollingsworth v. Perry, the Supreme Court decision that found Proposition 8, the voter-approved ban on same-sex marrage in California, to be unconstitutional. Their fight for marriage equality is portrayed in the documentaryThe Case Against 8, which premiered on HBO this week. They will be celebrating their one-year wedding anniversary Saturday at the Beverly Hilton in Los Angeles.