“Justice waits, and is used to waiting; and right wins the everlasting victory.”

“This is an unconstitutional attempt to narrow the definition of equality,” Piazza wrote. “The exclusion of a minority for no rational reason is a dangerous precedent.” 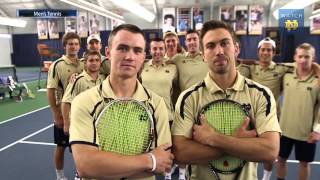 The Notre Dame Athletics Department show their support for the You Can Play Project.

LITTLE ROCK, Ark. (AP) — A judge on Friday struck down Arkansas’ ban on same-sex marriage, saying the state has “no rational reason” for preventing gay couples from marrying.

Pulaski County Circuit Judge Chris Piazza ruled that the 2004 voter-approved amendment to the state constitution violates the rights of same-sex couples. He didn’t put his ruling on hold as some judges have done in other states, opening the door for same-sex couples in Arkansas to begin seeking marriage licenses, though it was not clear whether that would happen before Monday.

“This is an unconstitutional attempt to narrow the definition of equality,” Piazza wrote. “The exclusion of a minority for no rational reason is a dangerous precedent.”

State Attorney General Dustin McDaniel’s office said he would appeal the ruling and asked Piazza to suspend it during that process.

“We respect the Court’s decision, but, in keeping with the Attorney General’s obligation to defend the state constitution, we will appeal,” spokesman Aaron Sadler said.

Piazza issued his ruling late Friday, about half an hour after the marriage license office in Pulaski County closed.

Arkansas courthouses typically aren’t open on weekends, but with the state in its early-voting period for a May 20 primary, several clerks’ offices will be open Saturday. However, clerks reached by The Associated Press after Piazza issued his ruling said they hadn’t been formally notified of it and weren’t prepared to begin issuing marriage licenses.

At least one couple who sued over the ban said they hoped to wed quickly. Kathy Henson said she and her girlfriend Angelia Buford planned to seek a marriage license in neighboring Saline County as soon as offices opened.

“We think that (Piazza) did a really great job and that he ruled on the right side of history,” Henson said.

The ruling came a week after McDaniel announced he personally supports gay marriage rights but would continue to defend the constitutional ban in court. Sadler said McDaniel sought the stay because “we know that questions about validity of certain actions will arise absent a stay.”

The amendment was passed in 2004 with the overwhelming support of Arkansas voters. Piazza’s ruling also overturns a 1997 state law banning gay marriage.

In his decision, Piazza cited the U.S. Supreme Court’s 1967 decision that invalidated laws on interracial marriage.

“It has been over 40 years since Mildred Loving was given the right to marry the person of her choice,” Piazza wrote, referring to that ruling. “The hatred and fears have long since vanished and she and her husband lived full lives together; so it will be for the same-sex couples. It is time to let that beacon of freedom shine brighter on all our brothers and sisters. We will be stronger for it.”

The U.S. Supreme Court last year ruled that a law forbidding the federal government from recognizing same-sex marriages was unconstitutional. Since then, lower-court judges have repeatedly cited the decision when striking down some of the same-sex marriage bans that were enacted after Massachusetts started recognizing gay marriages in 2004.

Federal judges have ruled against marriage bans in Michigan, Oklahoma, Utah, Virginia and Texas, and ordered Kentucky, Ohio and Tennessee to recognize same-sex marriages from other states.

In all, according to gay-rights groups, more than 70 lawsuits seeking marriage equality are pending in about 30 states. Democratic attorneys general in several states — including Virginia, Pennsylvania, Nevada, Oregon and Kentucky — have declined to defend same-sex marriage bans.

The head of the Human Rights Campaign, the largest U.S. lesbian, gay, bisexual and transgender civil rights, praised the ruling.

“This victory is an essential step on the journey toward full equality for all,” said HRC President Chad Griffin, an Arkansas native.

But the leader of the group that campaigned for the ban said the judge was undermining the will of voters.

“This ruling undermines marriage because once people start redefining marriage, there seems to be no place to stop,” Arkansas Family Council President Jerry Cox said.

McDaniel, a Democrat in his final year as attorney general, is the first statewide elected official in Arkansas to support marriage equality.