How transient a sense is mortal sight, when a wound on the retina may end the power of light and lens! But the real sight or sense is not lost. Neither age nor accident can interfere with the senses of Soul, and there are no other real senses.

(Science and Health with Key to the Scriptures pg. 214) 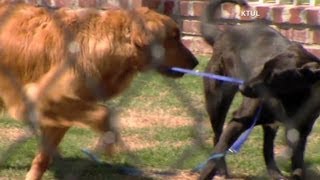 A blind golden retriever gets his own guide dog. CNN’s Jeanne Moos has this story of unlikely companionship.

From the April 19, 1900 issue of the Christian Science Sentinel

While Miss Ellen Terry was at Washington recently, she visited the Congressional Library and took great interest in the pavilion of the blind, and listened with much astonishment when the superientendent said:—

“I am in hopes that in time we may secure free sittings for them in the theatres, as is done for them now on the Continent, where they can hear and enjoy the standard plays.”

“But would they enjoy it?” asked Miss Terry, “When they could not see the acting?”

“Oh, yes, indeed,” answered Miss Giffin. “Perhaps you do not know it, but the loss of sight of the eyes is largely made up to those who are thus afflicted in the marvelous sight of the mind. Their imaginative powers are wonderful, and their keen minds picture all that they hear so vividly that I sometimes think they realize more fully what is going on about them than they would if they saw it with natural eyes.”

“Well, then,” said Miss Terry, “let us, you and I, inaugurate in this country the custom of sending the blind to the theatres. I will send you the tickets for as many as you think would care to go to hear me in ‘The Amber Heart,’ Saturday afternoon, and then you can bring them.”

On the next Friday the tickets were sent, according to the promise, and a happier party was never seen than were the twenty blind persons Miss Giffin took with her to the theatre the following day. Excellent seats had been reserved for them, and all during the play they listened with rapt attention. So acute were their ears that several times during the afternoon when Miss Terry turned her face toward them in speaking they would whisper excitedly to one another, “See! She is looking at us; she is saying that just to us!” When the play was over, at her invitation they gathered in one of the boxes and she came down to meet them. She sat down among them while each one lightly passed her skilful fingers over her face and called her their “Beautiful, beautiful Ellaline,” and poured out their gratitude to her for what they declared was the happiest afternoon of their lives.