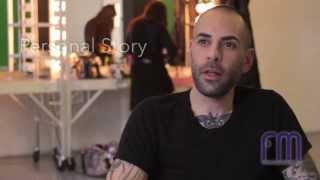 “This is so inspirational that it begs to be seen!”

The New F Word, a new anti-bullying campaign from The Friend Movement that was launched earlier this summer, brought together celebrities such as Tim Gunn, LeAnn Rimes, Lance Bass and others to be part of a series depicting them giving bullying “the bird.”

Now HuffPost Gay Voice’s very own Noah Michelson has joined the fight, as he sits down to share his story of being bullied in high school and how it got so bad he thought the only way out would be to injure himself — or worse — in order to miss school:

I didn’t know how to deal with it. I had no support system at all, I didn’t want to tell my parents because I didn’t want them to feel bad about it… I would stand at the top of my basement steps, I would try to and get enough courage to throw myself down the steps because it felt like that was a way out of what I was dealing with.

The Friend Movement started an Indiegogo campaign to fund a cross-country photo series to visit 40 cities and create 10,000 photos of people giving bullying the middle finger, to raise awareness about teenage bullying. As of this writing they have ten days left on their campaign, but they have already begun their national journey. You can find the list of the stops they’re making and where you can get your photo taken on their Indiegogo page here.

To hear Michelson’s reflections of being bullied in high school, and what he thinks of the bullies themselves, watch the video above, and to find out more about The Friend Movement, click here.