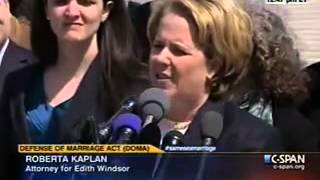 Listen to Edie Windsor answer a few questions starting at the 2:08 minute mark and the 5:30 minute mark. Ms. Windsor is the plaintiff in a case challenging the so-called “Defense of Marriage Act” before the Supreme Court.

DOMA Likely Going Down, With Or Without Strong Precedent

Sometimes a court case is so strong that you don’t need to win on all counts to get the same result. And perhaps the legal precedent you were hoping to set won’t be achieved, because the justices didn’t need to go that far to secure a victory. Such is the dilemma that LGBT advocates now face with the federal Defense of Marriage Act (DOMA), after the U.S. Supreme Court heard oral arguments yesterday. The law clearly violates equal protection, as it denies married same-sex couples all the 1,100 federal marriage benefits that their straight counterparts enjoy, and overruling it could set a federal precedent that gays are a “suspect class.” That may still happen, but the court could repeal DOMA on more technical grounds, ruling either that 1) House Republicans lack standing to defend the law in the first place, or that 2) DOMA is an attack on states’ rights. But either of these less desirable outcomes would still be a major victory for marriage equality.

Even if we prevail in repealing Prop 8 in California, or if current legislative efforts succeed at extending marriage equality to Rhode Island, New Jersey, Delaware, Illinois and Hawaii, same-sex couples will still lack full dignity until DOMA gets repealed. Section 3 of DOMA specifically says that, notwithstanding what states may recognize as “marriage,” gay couples are excluded from all federal benefits. That includes being able to file joint tax returns, claim Social Security benefits, sponsor a spouse for immigration purposes, or claim spousal benefits for federal employees, including military personnel. If you have eligibility for Social Security spousal benefits, then there shouldn’t be a reason why you can’t claim for potentially life-saving benefits that can help you with financial security in later life. Depending on the state you live in, the laws could be different. While nine states currently have same-sex marriage, thanks to DOMA, legally married same-sex couples in those states still lack full equality.

The legal strategy to overturn DOMA has been planned for years (unlike the Prop 8 lawsuit, which initially surprised civil rights advocates): Start with an incremental approach, getting a few states to pass marriage equality, so that we have same-sex couples who are undeniably married according to law. Then, when the federal government denies them benefits, sue on equal protection grounds. In the best-case scenario the U.S. Supreme Court would find what state supreme courts have found in California, Iowa and Connecticut: that sexual orientation is a “suspect class.”

That may still happen, as oral arguments yesterday clearly suggested that the four liberal justices and Justice Anthony Kennedy, the Supreme Court’s so-called “swing vote,” believe that DOMA is unconstitutional. But the danger here is that they may choose not to reach the equal protection question at all, because the case against DOMA is so strong that the law can be thrown out for other reasons.

Standing Could Throw the Whole Case Out, Repealing DOMA

The case against DOMA is a lawsuit against the federal government, but the Obama administration and the U.S. Department of Justice agree with the plaintiffs that the law is unconstitutional. As a result, they have chosen not to defend it in the courts, and the only reason we are at the U.S. Supreme Court at all is that House Speaker John Boehner spent $3 million in taxpayer money to have lawyers defend DOMA on behalf of House Republicans (technically the Bipartisan Legal Advisory Group, or BLAG, but the committee voted 3-to-2, along party lines, to take the case).

In oral arguments Chief Justice John Roberts and Justice Antonin Scalia questioned why the Obama administration is still enforcing DOMA if it believes that the law is unconstitutional, but the two conservatives failed to distinguish between applying a law because it’s on the books and refusing to defend it when it’s challenged in court. Roberts, a George W. Bush appointee, suggested that the president has the power to not enforce laws that he believes are unconstitutional, as opposed to asking the Supreme Court to interpret the U.S. Constitution. That raises some very disturbing questions about presidential power, but the point was obvious: Should the Supreme Court even hear this case at all? If the court denies standing, the lower court’s ruling that DOMA is unconstitutional will hold.

But the Supreme Court may deny standing for a more obvious reason: House Republicans don’t have a leg to stand on to argue that they would be harmed by DOMA’s repeal. And even if they did, what gives them the special status to be recognized as defendants in this case, unlike Prop 8’s proponents, who gathered signatures to put it on the ballot? Justice Kennedy and the four liberal justices asked skeptical questions about BLAG’s standing. Justice Sonia Sotomayor noted that, unlike in other cases, there is no statute in DOMA that empowers House Republicans to defend it independent of the Justice Department. Kennedy also asked why the House of Representatives, but not the Senate, would have standing to step in as defendants. Even Justice Samuel Alito, one of the four conservative justices, did not seem convinced that BLAG’s standing would withstand real scrutiny.

Will Justice Kennedy Go Along With Equal Protection, or Will He Stick to Federalism?

When the Supreme Court moved to substantive arguments, it was clear that the four liberal justices believe that DOMA violates equal protection. But while Justice Kennedy asked questions that suggested that he agrees with them, it was not clear that he would join an opinion that overturns it on equal protection grounds, possibly opting instead to take a states’ rights tack: Because Section 3 of DOMA denies federal benefits to all same-sex couples, regardless of what state they live in, it steps on the rights of states that have chosen to legalize same-sex marriage. In fact, one of the DOMA suits was filed by the Commonwealth of Massachusetts.

This “federalism” question dominated the oral arguments. In one revealing exchange during Solicitor General Donald Verrilli Jr.’s presentation, Verrilli began eloquently explaining how DOMA violates equal protection, but Justice Kennedy cut him off, saying, “You insist we get to a very fundamental question about equal protection, but we don’t do that unless we assume the law is valid to begin with.” This suggests to me that Kennedy wants to overrule DOMA on federalism grounds.

The Supreme Court justices will soon deliberate and will probably reach a decision on this case and the Prop 8 case in late June, before they adjourn for summer recess.

Tonight, from 6 to 8 p.m., the San Francisco LGBT Community Center will host a recap of the Prop 8 and DOMA oral arguments with attorneys from the ACLU and the National Center for Lesbian Rights, moderated by the Horizons Foundation.

Paul Hogarth has a J.D. from Golden Gate University Law School and is licensed to practice law in California. He was a legal intern at Equality California in the summer of 2005, was active in Bloggers Against Prop 8, organized volunteers who traveled to Maine in 2009 for the marriage campaign, live-blogged the Prop 8 trial for the Courage Campaign in January 2010 and worked as a Campaign Consultant for United for Marriage, a project that sent volunteers to Maine, Maryland, Minnesota and Washington to supplement campaign field efforts in 2012.

Paul Hogarth: DOMA Likely Going Down, With or Without Strong Precedent