For what it may be worth to you – I am a Journal listed CS practitioner, When my son, my only child, came out as gay a number of years ago, I did not ask God to change him; I asked God to change me-to open my eyes and heart wide enough to not lose sight of all that really matters and to all that is real and true about my son as His whole and holy ideal. So I have always been free to happily love my son with all my heart, And he loves me, too.

I believe in Love. 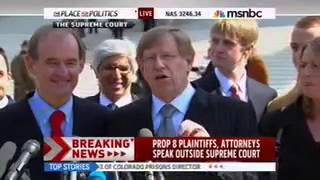 by RespectForMarriage•3 hours ago•239 views

“And you can play with that metaphor,” Kennedy said, continuing that in that consideration, “There’s a wonderful destination” or “a cliff.”

Kennedy seemed genuinely interested in that “wonderful destination” and mortified by the prospect that there still might be a cliff. He acknowledged that while the social science on gay marriage is relatively new, there is an “immediate” legal harm to those same-sex couples who cannot be married. He said the voice of thousands of children of same-sex couples is an important aspect of the case.

“They want their parents to have full recognition and legal status,” Kennedy told Charles J. Cooper, who is representing supporters of Prop 8’s ban on gay marriage. “The voice of those children is considerable in this case, don’t you think?”

Kennedy also expressed deep doubts that Prop 8, and same-sex marriage bans in general, present “no harm of denigration” against gays and lesbians.

Before the justices even reached the merits of the constitutional case for same-sex marriage, Chief Justice John Roberts instructed both advocates to argue whether the parties defending Prop 8 had legal standing.

On this point, the court’s liberal bloc — Justices Ruth Bader Ginsburg, Stephen Breyer, Sonia Sotomayor and Elena Kagan — all appeared to believe that the Prop 8 proponents could not represent the state of California after Gov. Jerry Brown (D) and Attorney General Kamala Harris refused to defend the law.

Yet the court’s Republican-appointed members — Chief Justice Roberts and Justices Kennedy, Antonin Scalia and Samuel Alito — seemed to agree with the California Supreme Court, which ruled that Cooper’s clients could serve as representatives of the state’s interest in the case.

When arguments reached the constitutional merits, the ideological alliances swapped.

“Can you think of any other rational basis, reason, for a state using sexual orientation as a factor in denying homosexuals benefits or imposing burdens on them?” Sotomayor asked Cooper. “Is there any other rational decision-making that the government could make? Denying them a job, not granting them benefits of some sort, any other decision?”

And when Cooper said Prop 8 supports “responsible procreation,” Kagan pushed back. “If you are over the age of 55, you don’t help us serve the government’s interest in regulating procreation through marriage. So why is that different?”

Yet the liveliest moments came when Scalia asked Ted Olson, President George W. Bush’s solicitor general and the lawyer for the two same-sex couples challenging Prop 8, “When did it become unconstitutional to exclude homosexual couples from marriage? 1791 [when the Bill of Rights was ratified]? 1868, when the 14th Amendment was adopted?”

Olson pushed back against Scalia’s originalist view, asking him in return, “When did it become unconstitutional to prohibit interracial marriages?”

“It’s an easy question,” Scalia said. “At the time that the equal protection clause was adopted. That’s absolutely true. But don’t give me a question to my question.”

“There’s no specific date in time,” Olson ultimately answered. “This is an evolutionary cycle.”

Alito’s issues with Olson’s argument were more pragmatic. “You want us to step in and render a decision based on an assessment of the effects of this institution which is newer than cell phones or the Internet,” Alito said. “On a question like that, of such fundamental importance, why should it not be left for the people, either acting through initiatives and referendums or through their elected public officials?”

Yet Ginsburg noted that one of the decisions Cooper was relying on in the case was written in 1971, when “same-sex intimate conduct was considered criminal.” In that case, Baker v. Nelson, the Supreme Court dismissed a Minnesota man’s attempt to marry his male partner as lacking a “substantial federal question.”

Kennedy also said he was “trying to wrestle with” whether a same-sex marriage ban should be viewed as a gender-based classification, calling it a “difficult question.”

By the end of the argument, it was clear that Kennedy believed the Prop 8 proponents had standing to sue, that same-sex couples had the right to marry and that such a right extended to all states. Yet that option — making same-sex marriage a federal constitutional right — compelled him to search for an escape hatch.

“Why [do] you think we should take and decide this case?” Kennedy asked Cooper.

By the time he asked that question at the very end of the argument, Kennedy had already sided with his four conservative colleagues (assuming the ever-silent Justice Clarence Thomas agrees with his more vocal colleagues) that Cooper’s clients belonged in court, while also siding with his four liberal colleagues that the Constitution mandates marriage equality. Meanwhile, Kennedy rejected the 9th U.S. Circuit Court of Appeals’ California-only reasoning, and both liberals and conservatives have lambasted the Obama administration’s argument for a so-called “eight-state solution.”

That leaves Kennedy, who holds the fifth vote in this case, facing down those uncharted waters. And if his own history on the court is any indication, he isn’t as afraid of the deep end as he let on.

A decision in the case, Hollingsworth v. Perry, is expected by July.

This is a developing story and has been updated.