There must never be a time when a Christian Scientist can be accused of prejudice, bigotry, discrimination, or hate. 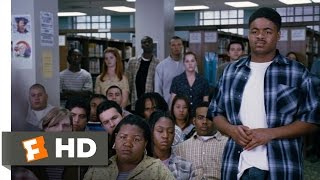 Did the woman who hid Anne Frank play herself in the movie?
No. The woman who hid Anne Frank, Miep Gies, was played by veteran stage and screen actress Pat Carroll. However, the real Miep Gies turned 98-years-old in February of 2007, just several weeks after the movie Freedom Writers was released in theaters. As depicted in the film, the real Miep Gies did come to speak to Erin’s students after they raised enough money to fly her from Amsterdam. Miep was 87 when she came to speak at Woodrow Wilson high school in Long Beach, California. She came during the 1994/1995 school year.

Their efforts have paid off spectacularly, both in terms of recognition—appearances on “Prime Time Live” and “All Things Considered,” coverage in People magazine, a meeting with U.S. Secretary of Education Richard Riley—and educationally. All 150 Freedom Writers have graduated from high school and are now attending college.

An Interview: on racial prejudice

with contributions from Alton A. Davis

From the August 30, 1969 issue of the Christian Science Sentinel

Once a porter in a steel mill, then head of a public relations firm, Alton A. Davis is presently chairman of the board of Gran Mother’s Bakeries Inc., an institution appointed by the United States Department of Labor to provide vocational and basic academic training for the functionally unemployed in the hard core and economically depressed areas of Chicago, Illinois. He has traveled widely and has served his branch Church of Christ, Scientist, as First Reader.

You are a member of the black community, and a Christian Scientist. How do you look at the great stir in race relations these days?

It is termed a social revolution; but, in reality, it is man’s quest for God.

Is it people or is it Principle that is causing this revolution?

Principle, I am sure. Mrs. Eddy clearly saw the responsibilities of Christian Scientists to line up with divine Principle in this modern world, when she said: “A Christian Scientist occupies the place at this period of which Jesus spoke to his disciples, when he said: “Ye are the salt of the earth.’ ‘Ye are the light of the world.'”1

The thoughts of Christian Scientist are disciplined by his religious training. It teaches him how, in the midst of tumult, to experience “Gethsemane”—defined by Mrs. Eddy as, “Patient woe;the human yielding to the divine; love meeting no response, but still remaining love.”2

While Christian Scientists remain loving, they are not naive. They can recognize the wolf in sheep’s clothing, unmask spiritual wickedness in high places, and correctly identify the religious bigots of our time, who practice evil in the name of good.

The Christian Scientist early learns that nonviolence must be a part of his Christian character. Christ Jesus, the first proponent of effective nonviolence, said, “All they that take the sword shall parish with the sword.”3 It is the Scientist’s understanding and faith in the divine law that gives him the confidence to take a positive role in social conflict on the side of justice, equality, and freedom for all men, regardless of the custom or traditions practiced around him.

What is racial prejudice?

It is spiritual ignorance. if is a form of world sickness that Christian Scientists are morally obligated to heal. Racial prejudice is global, but in the United States it mainly involves antagonistic attitudes between white and black.

Strong laws are needed, but legislation does not change attitudes. The only way to get a man to change his attitude is to confront him with a reality—a new fact—he has never considered before, such as the fact that God, Spirit, is the only creator of man, making man always spiritual. When one recognizes the real man, he will begin to see him as neither black nor white but as a spiritual idea of God. It is this true concept of man that will relieve anyone of racial prejudice.

How do I know if I am prejudiced?

If you have been living in a segregated suburban area, where you have never had the occasion to communicate with those of a different ethnic background on a man-to-man basis, perhaps there has never been an opportunity for you to recognize whether you are racially prejudiced or not.

Living in social isolation, the evil of racial prejudice can be smoldering beneath the surface. If you uncover this in your thinking, you can treat it as you would any other form of sin. You must hold to the fact that man in God’s likeness has no evil tendency. Then you must live your prayer. No man really wants to be a bigot, unjust and unfair; for, in reality, the qualities of fairness and justice cannot be separated from anyone. They belong to man in God’s image, and they demand expression now!

Is there something in the human mind that resists the healing of this social scourge?

Yes, there seems to be. Society’s racial myths and cruel traditions seem real and justifiable to some individuals. Perhaps, seeing no reason to give them up, one allows them to supplant the Principle that really should govern him. Racial prejudice is mortal mind’s way of looking at others; it would be abandoned if one could only see how ungodlike it is.

Jesus discerned that social and religious customs of his time got in the way of true religion: “Why do ye … transgress the commandment of God by your tradition?” he prodded. “Ye hypocrited. …”4 And Mrs. Eddy says: “There is no hypocrisy in Science. Principle is imperative. You cannot mock it by human will.”5

Racial prejudice and discrimination are a violation of God’s law of love. All men are created “of one blood”;6 God’s ideas have only one substance, one intelligence. Man is the reflection of Spirit. Unless we all come face to face with the spiritual reality that there is neither black nor white, “Greet nor Jew …: but Christ is all, and in all,”7 we cannot hope to see the kingdom of God take command on earth. God’s kingdom cannot come where inharmony exists, where there is grievous conflict and separation because of superficial ethnic differences. We’ve got to know that we are all the children of God, that creation is undivided. Jesus announced to the world two great commandments: first, to love God; then, to love your neighbor as you love yourself.

And Mrs. Eddy says: “I make strong demands on love, call for active witnesses to prove it, and noble sacrifices and grand achievements as its results. Unless these appear, I cast aside the word as a sham and counterfeit, having ring of the true metal.”8

Any other stand would be just preaching, not practicing. You can’t say you’re a Christian Scientist and forever do what is opposite to the rules of Science. These rules are fixed, and there are no provisions for deviation.

Are there more prejudiced people in the North or in the South in the United States?

Racial prejudice knows no boundary, and it is not limited to any particular locale. It is just as prevalent in South Carolina as it is in South Africa. It is just as mean and in Chicago as Miami. Christian Scientist must condemn racial prejudice everywhere because he recognizes it to be a sin. He never condemns a prejudiced person, but the evil which seems to control him.

In many churches located in multiracial communities you will find the membership limited to one ethnic group. If the church is living up to its Christian responsibilities, it will not make a distinction between black and white and limit its membership. The Mother Church welcomes all people to its services, to its Sunday School, and into membership. Article XVI, Section 2, of the Manual of The Mother Church by Mrs. Eddy states, “It shall be the duty and privilege of the local members of The Mother Church to give their seats, if necessary, to strangers who may come to attend the morning services.” I think this should set a moral standard for its branch churches to follow.

Christian Science has spread over the world among all races and colors. We must make certain that all men, regardless of race, creed, or color, are extended a welcome invitation to our church. We must find ways to make the community around a Christian Science church feel that it represents Truth and Love, and is founded upon the fatherhood of God and the brotherhood of man. Our church must appear to the community as an institution that represents brotherhood as a living reality.

Would you care to mention any personal experiences you’ve had in coping with racial discrimination?

I’ve had many, and I hope I have learned more of the meaning of love from each experience. I once visited a Christian Science church where I was told that the custom of the community did not permit the races to mix in church services. Seeing that I was a black man, an usher met me on the sidewalk and asked what I wanted.

“Is this not a house of God?” I answered.

“Yes, it is,” he said somewhat sheepishly.

“The invitation read by your First Reader at each services, ‘All are welcome’—is it real?” I went on. “I am a weary traveler seeking a cup of cold water in Christ’s name.”

The usher stepped aside. After the service I was extended a cordial welcome by many members of the congregation. I travel often in the North and South, and I find more and more genuine welcome to Christian Science churches and Reading Rooms than I did in times past. But much remains to be done to prove the brotherhood of man in all our churches.

Remember the people who came to Jesus to ask if he were the Messiah? He told them to look at his works and decide for themselves who he was. Just so, many men will come and ask us if Christian Science is the religion of destiny. Will we be able to say, “Don’t ask me if this is Jesus’ own church; don’t ask me if I’m a true Christian. Look at my church and my works and tell me what you think. Whom do you say that I am?”